The features of the stone chamber tomb

Explore the stone chamber tomb and the menhir of the dolmen goddess interactively. Behind each click point are concealed further information and insights into the 1987 excavation. 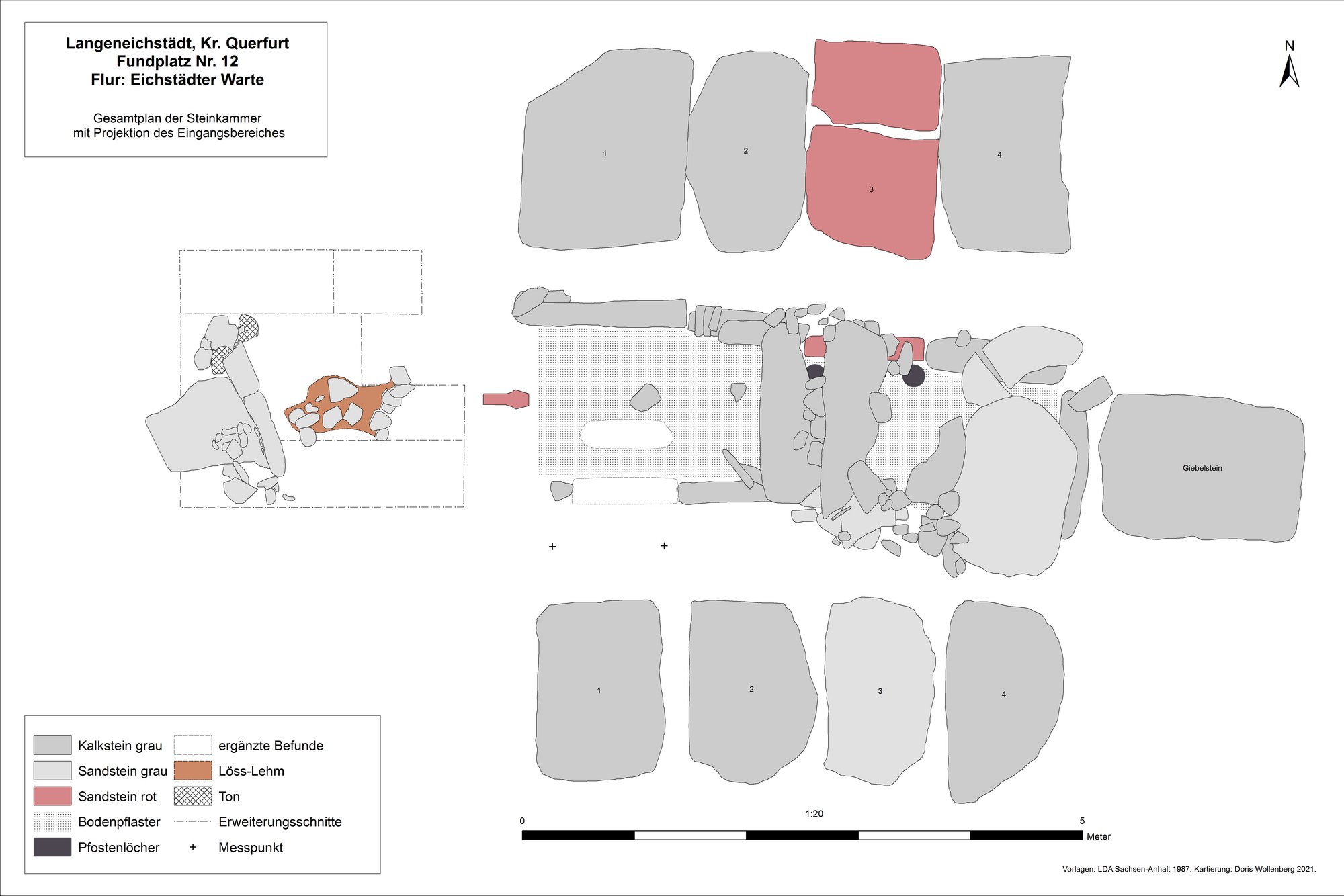 At the western end of the stone chamber, the excavators came across a special object, for which archaeologists still have no adequate explanation: a small stele of red sandstone that had been sunk into the native loess loam exactly in the middle of the chamber and wedged in place with limestone slabs. 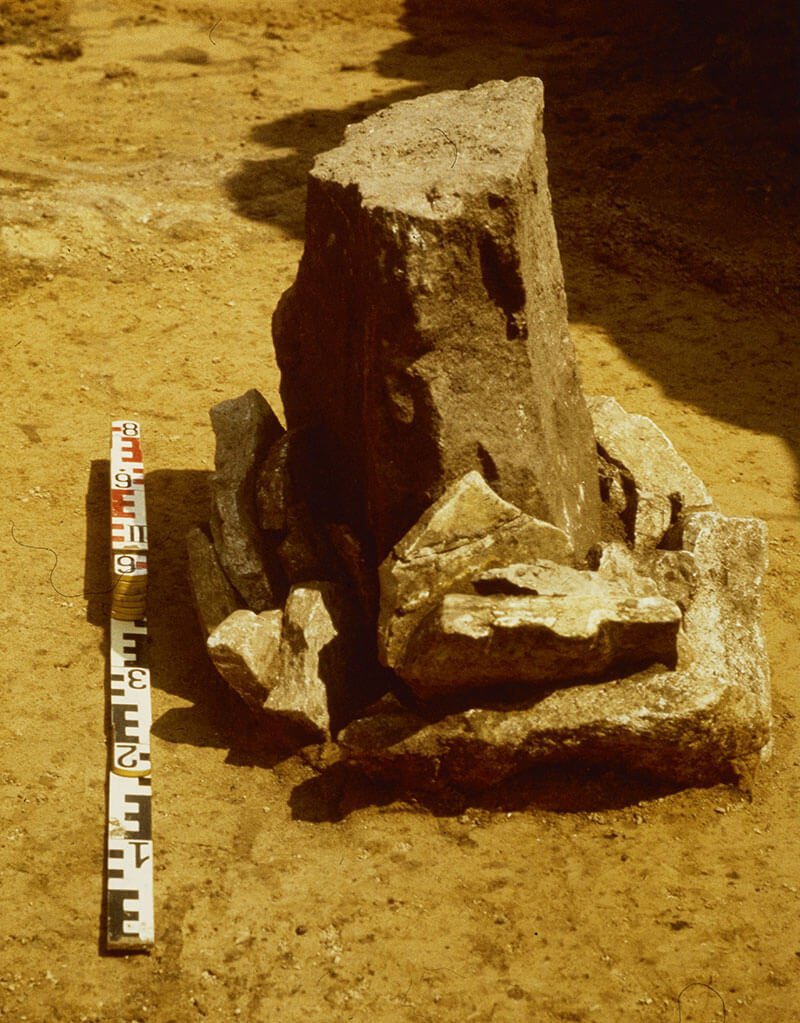 So far it is unclear what function and meaning the stele might have had. No static function can be deduced from the architecture of the stone chamber tomb: the top edge of the stele was almost flush with the paved floor. Since the western area of the chamber tomb was already heavily disturbed by field work and ploughing, the red miniature stele might originally have been much taller. Deliberate destruction would also be conceivable. Such practices are attested many times, especially by the people of the Corded Ware culture. Fragments of red sandstone were also found amongst the finds, which could support such a hypothesis. 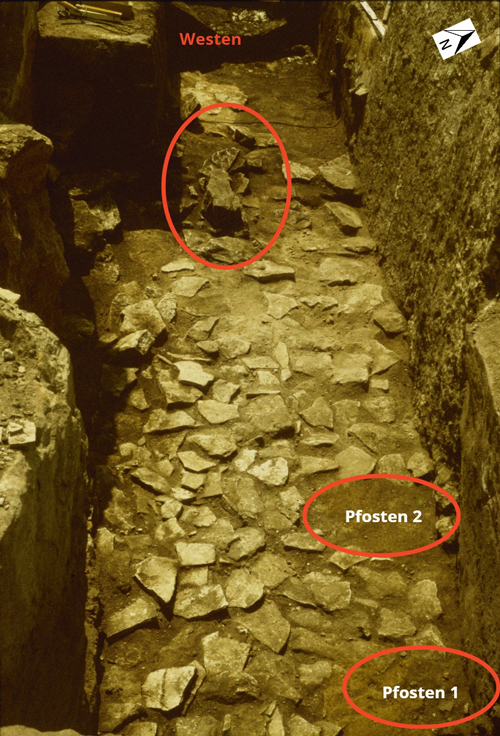 The photo shows the slab paving, the two postholes next to the northern wall of the chamber and the position of the red sandstone stele. View from the east. Photo: © LDA. 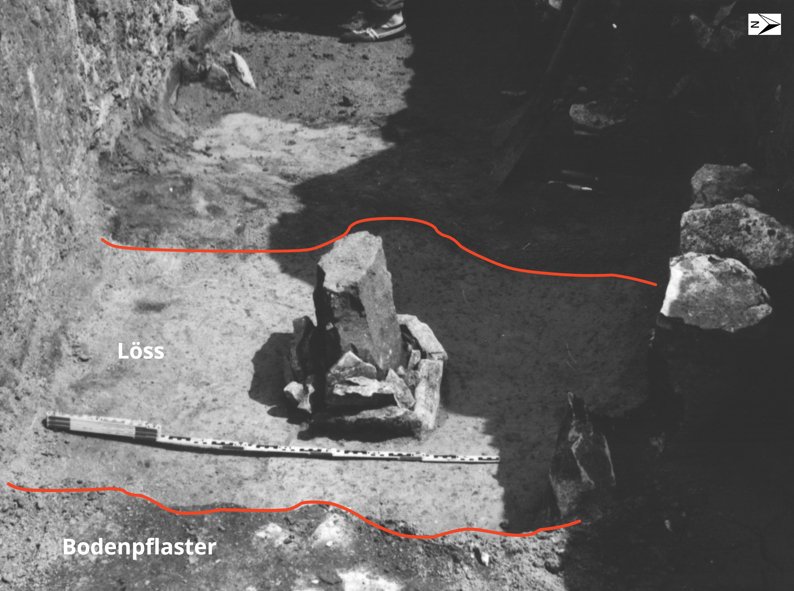 View of the stele from the east. The red lines mark the boundaries of features between the paved floor, the light-coloured loess loam, and a darker earthen feature adjoining it to the west. © LDA.

The red colour and the material of the small stele (sandstone) correspond strikingly with the red sandstone slab, already broken in antiquity, in the northern wall of the chamber, on which rested also the menhir of the dolmen goddess. Possibly we are dealing here with special areas of the tomb, which accordingly were marked by special building materials. 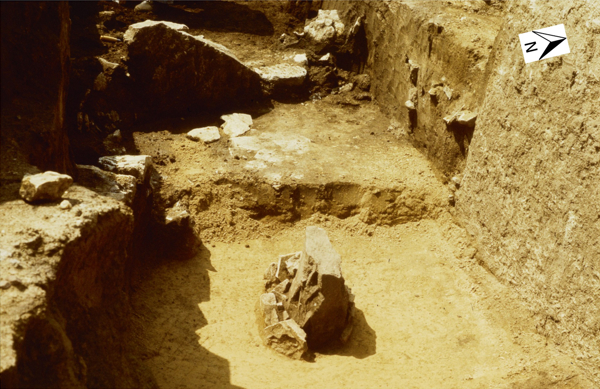 View of the stele from the east. In the background, the terminal slab of the entrance area is visible. On the right: the fourth stone slab of the northern chamber wall. Photo: © LDA. 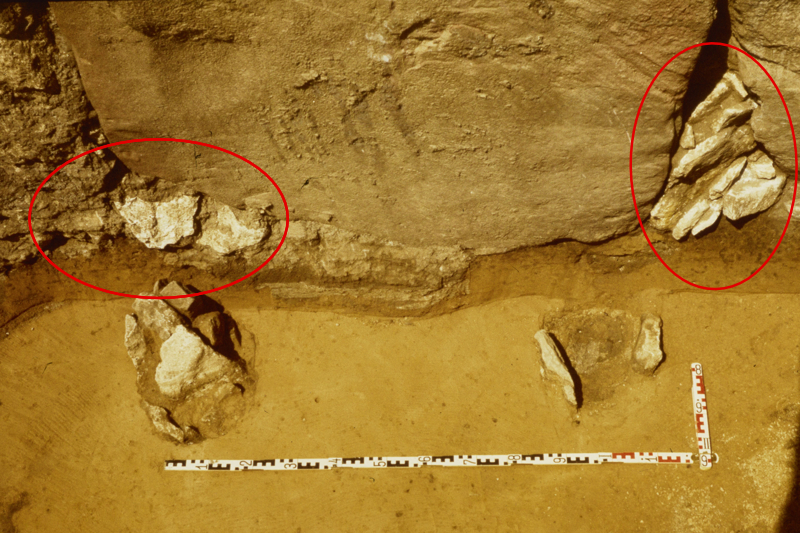 View of the interstices lined with clay and small stones between the sidewall stones. Photo taken from the south. Photo: © LDA.

The stone chamber tomb of Langeneichstädt has a structural peculiarity that has only rarely been observed in other tombs: a sealing material of fine grey clay. Since the stone slabs do not have straight sides, they do not close flush edge to edge. Gaps remained that were grouted with clay and small pieces of limestone. The burial chamber was thus completely sealed and protected from wind and weather. Differences in the height of the ground were also levelled out in this way. 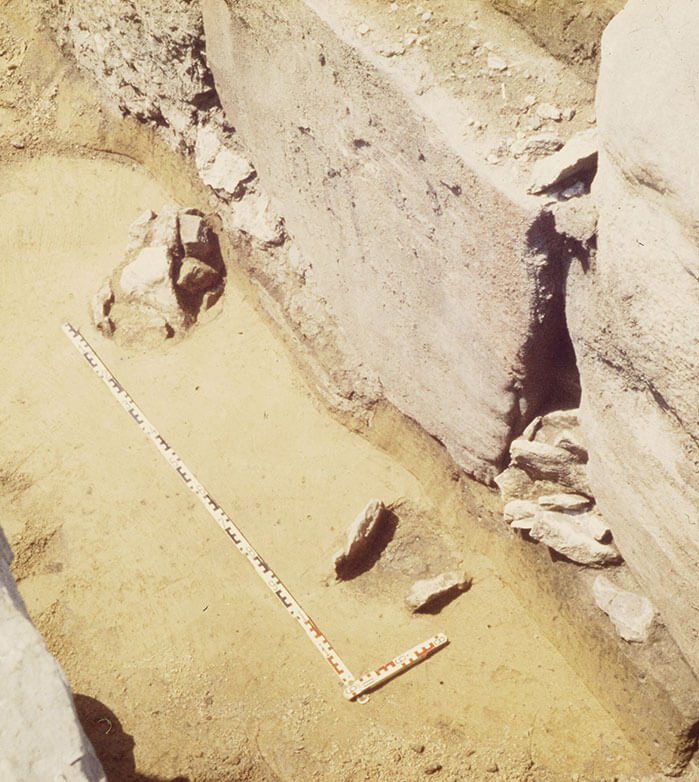 Lower part of the red sandstone slab with broken edge. The two postholes are visible in front of it. View from the south-east. Photo: © LDA.

The red sandstone slab differs from the other slabs not only in colour. It had apparently already broken in two in prehistoric times, but was nevertheless reused. Two small wooden posts inside the burial chamber served to stabilise the broken slab. In context, this construction can only be understood from the two postholes wedged with small slabs to stabilise the wooden posts. 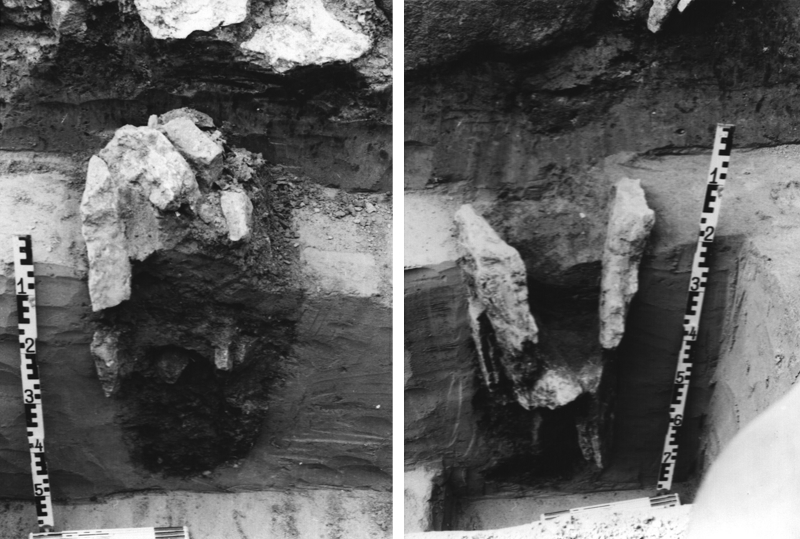 The two postholes were sunk directly into the native loess loam. Photo: © LDA. 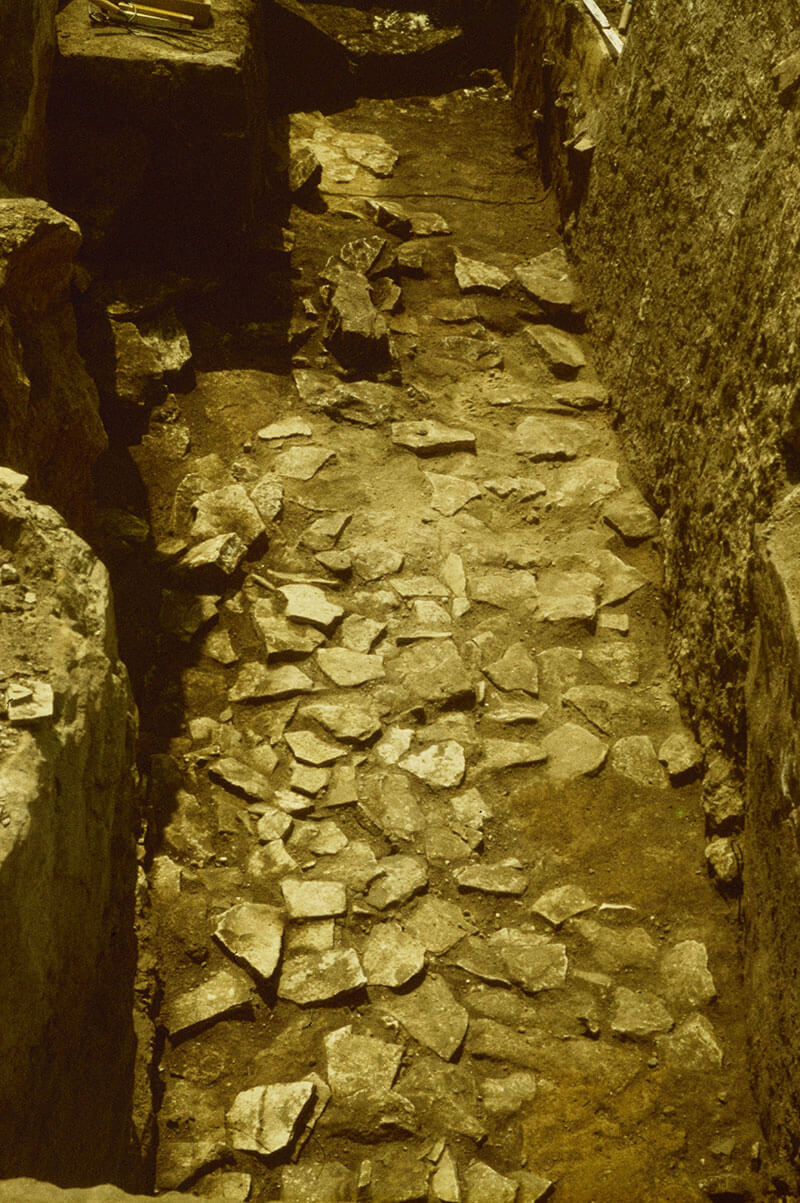 View on to the top layer of the slab paving within the burial chamber. Photo taken from the west. The small red sandstone stele is visible in the background. © LDA.

The floor of the burial chamber was paved with thin slabs of limestone. During the excavations, a total of five layers of paving were recorded. Above the slab paving was a plaster screed floor containing inclusions of charcoal, pebbles, and in part fragments of red shell-limestone.


It is assumed that the tomb had been completely cleared and reused again and again over a period of several centuries. In this context, apparently also a new floor was laid directly over the ancient trampling layer. In the gaps between the slabs, very small finds were found, which probably slipped unnoticed into the small cracks during the recurrent clearing of the tomb. 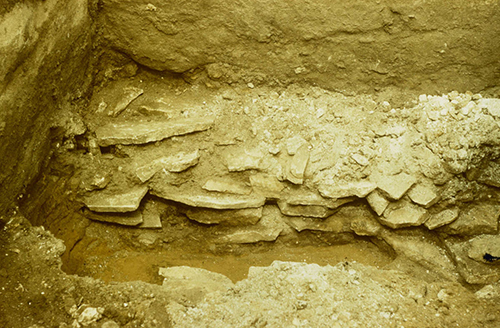 Section N–O: Section through the slab paving, photo taken from the west. To the left: the first side stone of the chamber’s northern wall, in the foreground: the terminal slab. © LDA. 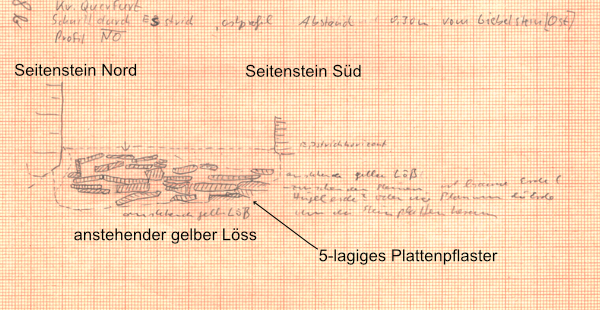 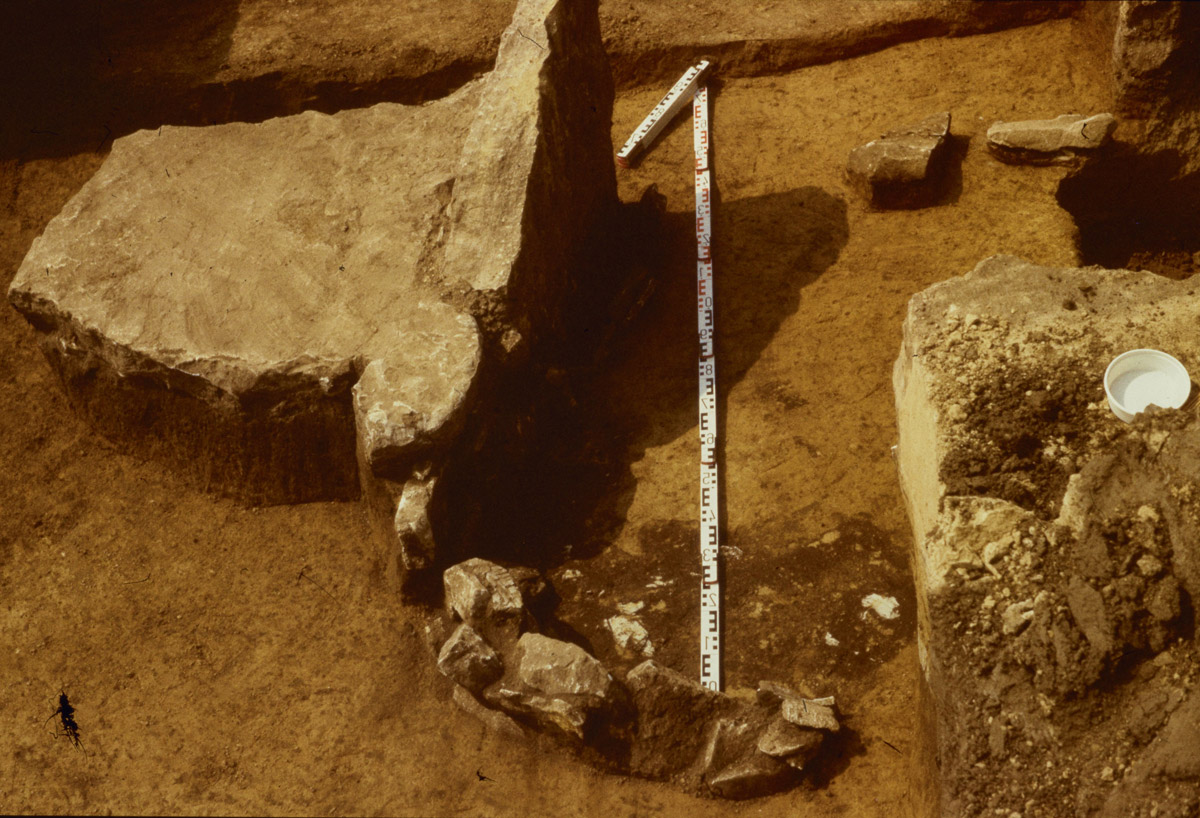 Entrance area of the stone chamber tomb. Photo taken from the south. © LDA.

Entrance area of the stone chamber tomb. Photo taken from the south. © LDA.

The entrance to the chamber tomb is oriented exactly to the west. The excavators assume that originally a room, separated from the main chamber, existed here, which adjoined the first pair of sidewall stones to the west. However, at the time of excavation, this part of the tomb had already been heavily disturbed and was only incompletely preserved. The interpretation of the features is therefore particularly difficult.

The still upright terminal slab was clearly visible. It rested on a stone foundation and was wedged in the ground with small stones. Immediately in front of the entrance lay a trapezoidal limestone slab, which is interpreted as a “stepping stone” or threshold.

The majority of the archaeological finds came from the entrance area. It mainly consists of highly fragmented pottery. These finds are possibly evidence for the recurrent clearing out of the tomb chamber. They could also be related to ritual acts in the context of the commemoration of the dead, such as funeral feasts or libations. 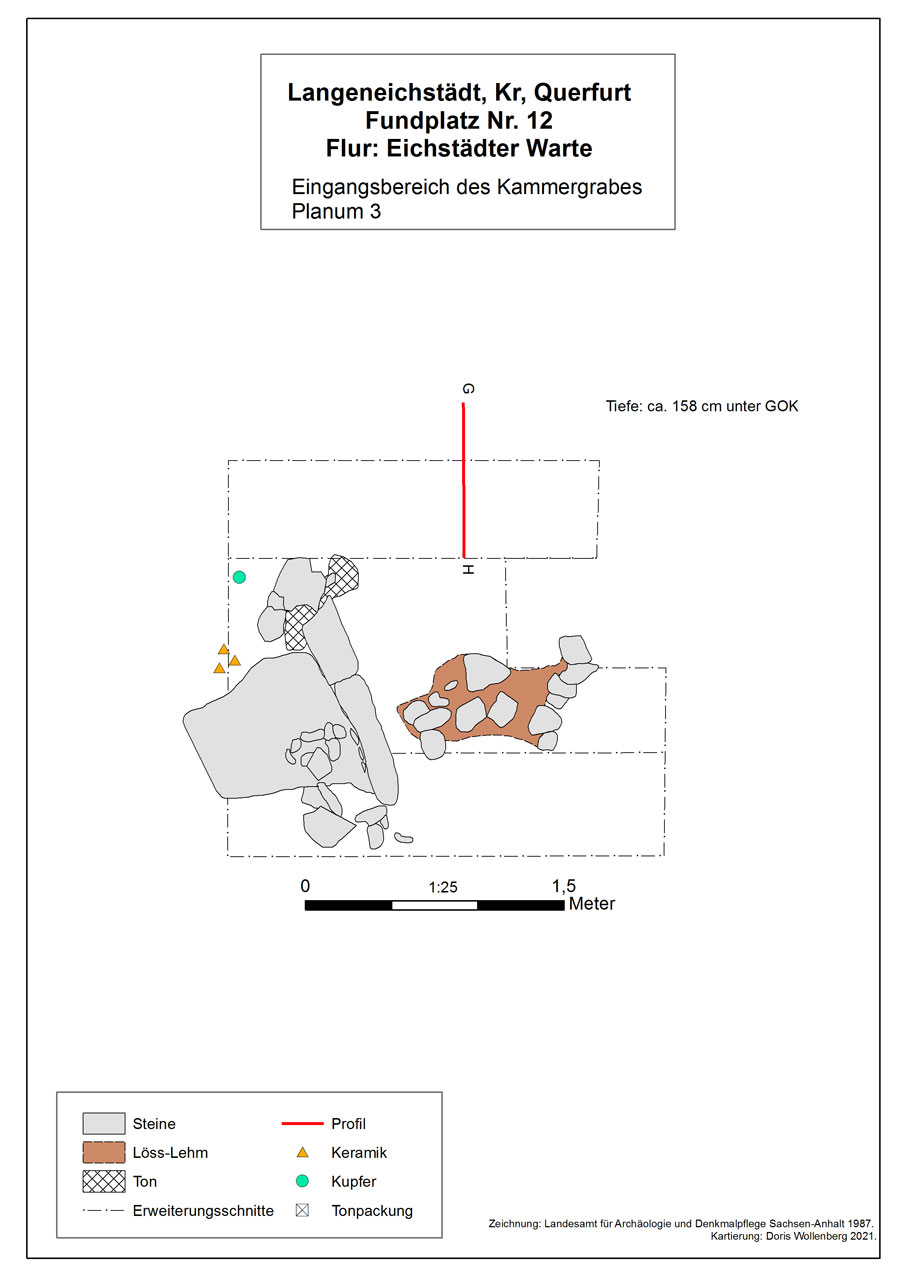 The trapezoidal limestone slab was apparently placed deliberately and extremely carefully in front of the entrance area of the chamber tomb. It lay on a previously applied layer of grey clay, which was also used in other parts of the chamber tomb to level out unevenness or to close gaps. The slab is interpreted as a „stepping stone“ or threshold to the entrance area of the megalithic tomb.

Entrance area of the stone chamber tomb. View from the south. © LDA.


The terminal slab was part of a construction that encircled the burial chamber at the western end. The vertically standing limestone slab was wedged in the ground with small stones and had its own stone foundation. The inward-facing side abuts an antechamber paved with limestone, which was separate from the actual burial chamber. 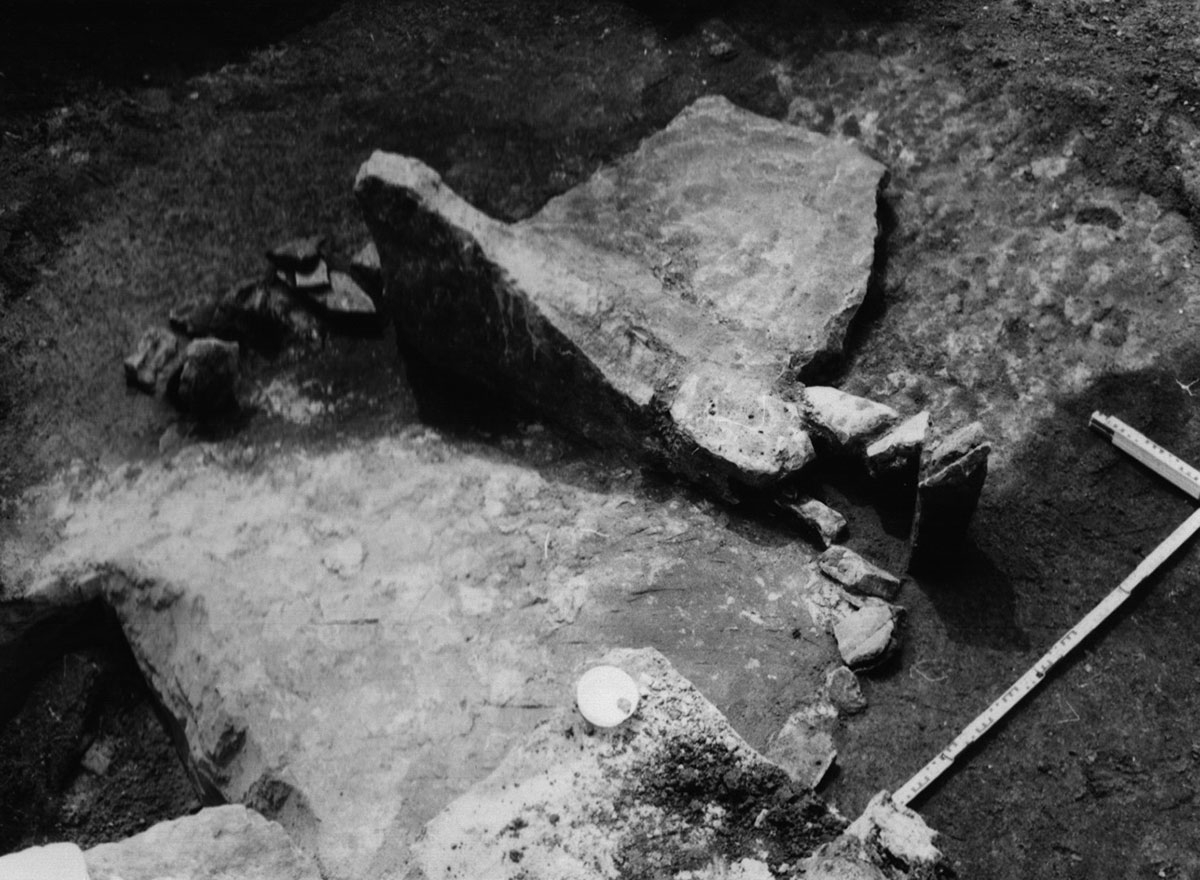 The entrance area with terminal slab, stepping stone, and stone boundary. View from the north-east. © LDA.


The area within the stone boundary revealed remains of a carefully laid paving of flat limestone slabs, which had been laid in the native loess. 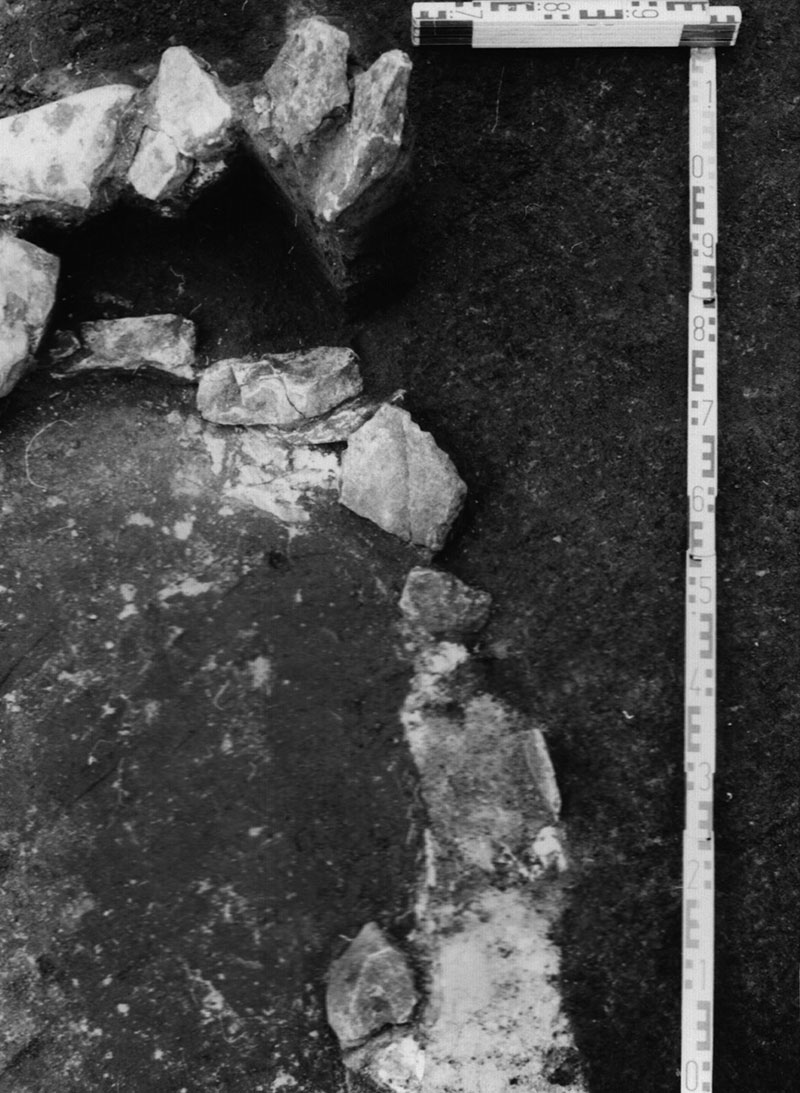 Detail photo of the stone boundary in the planum. © LDA.

The almost semi-circular stone boundary encloses the terminal slab of the entrance and the ante-chamber of the tomb. However, the stone border does not quite reach the extant sidewall stones of the burial chamber. 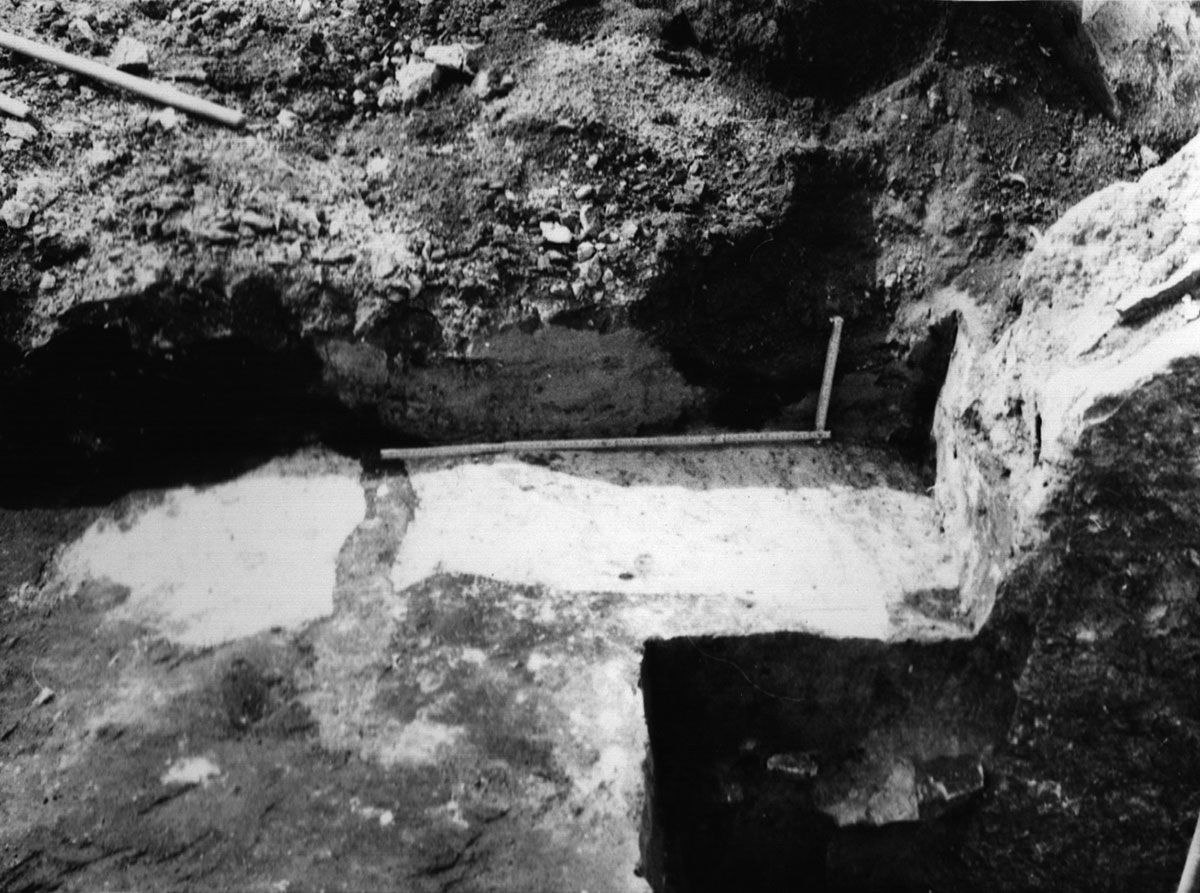 Planum of the northern extension in the entrance area. View from the south. Photo: © LDA.

After the chamber tomb had been built, the structure was grouted with clay.

Afterwards, the remaining spaces of the construction trench were filled with loess and the entire tomb was covered with a layer of loess. The photo shows the light, yellow loess backfill, which is interrupted by a dark discolouration. The excavators interpret this feature as the as the remains of a wooden wall.

The sharp boundaries between the loess backfill and the dark earth of the older mound are clearly visible. They show that the construction trench for the stone chamber tomb was only slightly larger than the burial chamber. The tomb was probably covered with a mound so that only the entrance area remained visible and accessible. 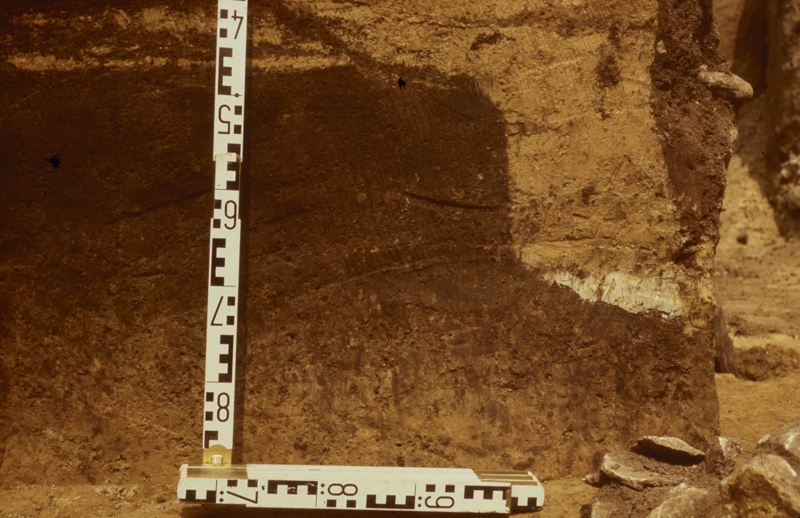 Section through the backfill. The light colouring is the loess backfill of the construction trench. View from the west. Photo: © LDA.