The Hunt for the Sky Disc

The hunt for the Sky Disc has already been told in many ways:

As a crime documentary by journalist Thomas Schöne, who followed the trials surrounding the discovery and selling of the Sky Disc at close quarters.

As a Punch-and-Judy show in the Nebra Ark, the incredible scenes and twists and turns skilfully exaggerated and overacted by strong characters. Or as meticulously presented facts in a court judgement, which is the result of a lengthy appeal process by the dealers in stolen goods.

And also in countless conversations in the evenings at the pub, where the memories of long days of trial proceedings, fateful events, and the countless questions that the events of that time still raise today always find eager listeners and lead to lively discussions.

In this story, it is not the archaeological objects that are the main protagonists - although everything revolves around them - but the people involved. We want to bring them into the spotlight a little more and give you an idea of the "stuff" they are made of, what the circumstances and the impetus for their actions were – altogether a small museal contextualisation. 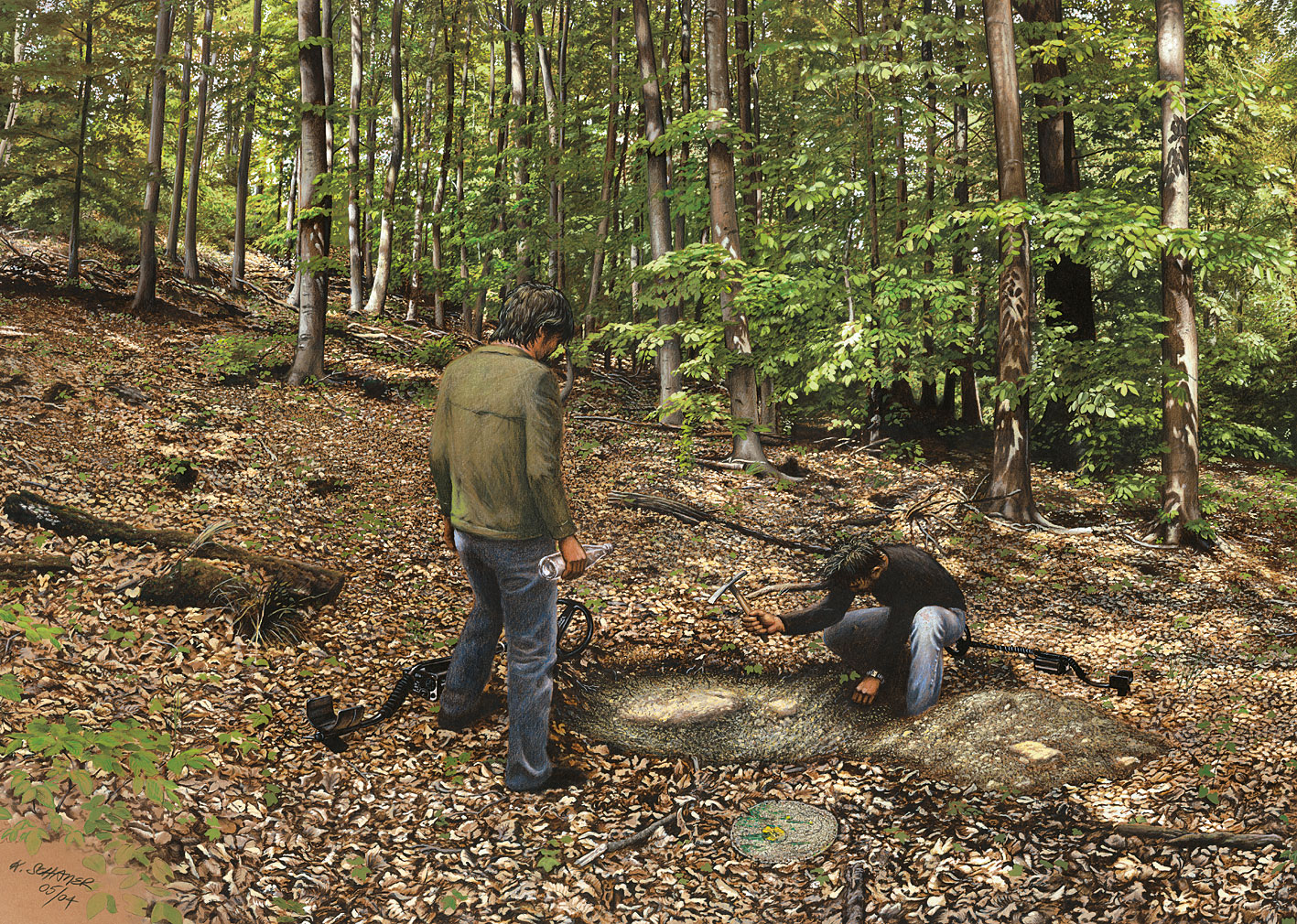 Reconstructed situation: The looters at the site where the Sky Disc was found on the Mittelberg hill near Nebra. © LDA, illustration: Karol Schauer

4 July 1999 was a hot day. As Henry W. related in court, he and his buddy Mario R. were searching for militaria on the Mittelberg hill near Nebra with metal detectors.

The operation was arduous, as the previous evening's boozy celebrations were still in their bones. The rest is history: almost on the way back, Henry W.'s detector indicates a major find. Only just below the surface, after initial groundwork, he discovers the upright Sky Disc, which he is only able to detach from the soil with difficulty and by means of a fire-fighter’s pickaxe. In the process, he inflicts severe damage to the object, which the two initially believe to be an old bucket lid. 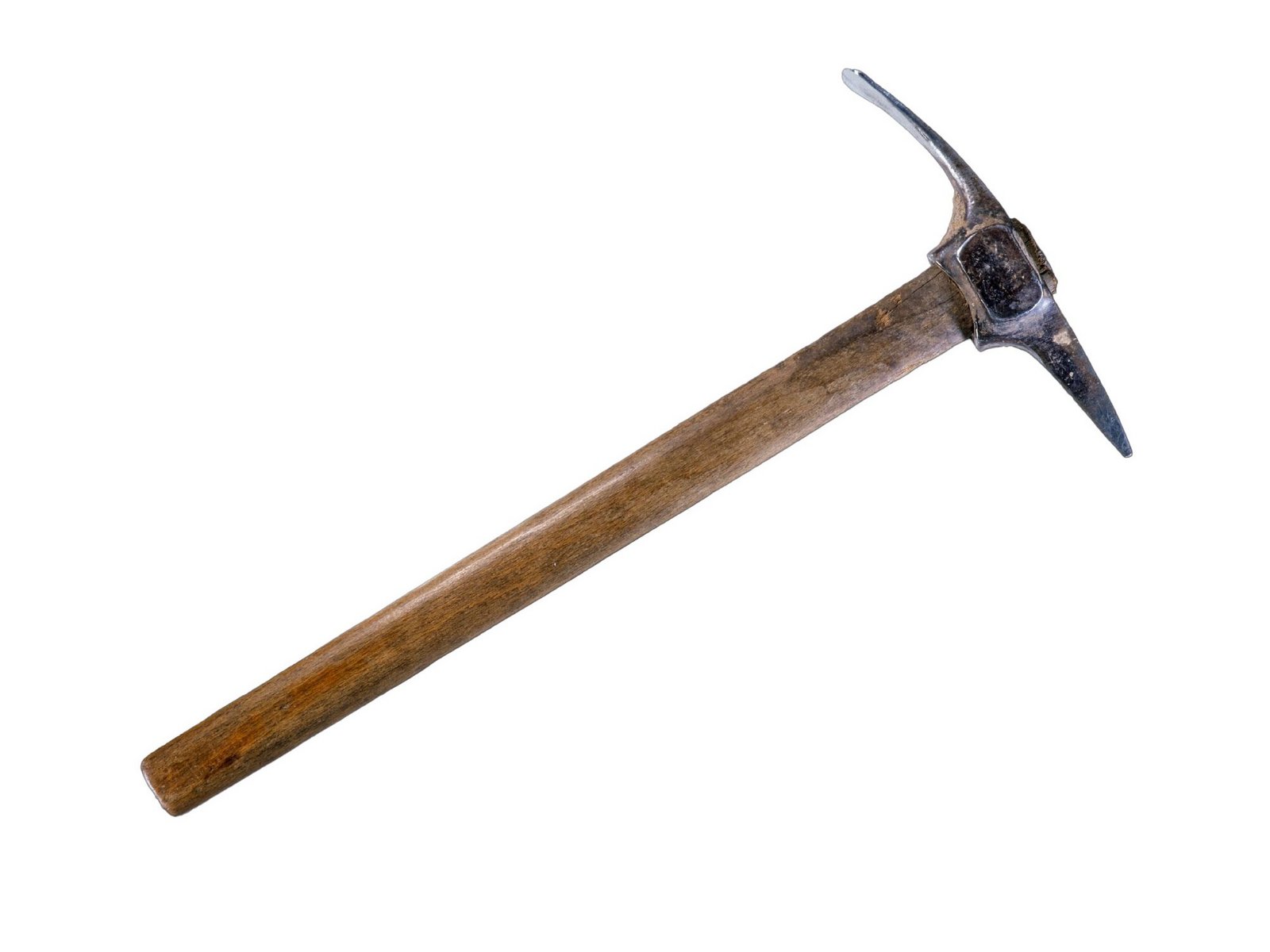 This modified fire-fighter’s pickaxe was handed over to the authorities by the finder Henry W.. The hack marks, which were archaeologically documented during the excavations, match the shape of the blade. © LDA, photo: Juraj Lipták

Once the gold glints and the swords, lying in front of the disc, come to light, they both quickly realise that this must be an extraordinary find.

They promptly inform Achim St., whom they know as a buyer of such objects. Officially and legally, the treasure cannot be sold - a law, the so-called Schatzregal (treasure trove law), regulates in Saxony-Anhalt that all "ownerless cultural monuments" or scientifically significant finds belong to the state.

In Germany, the law governing the protection of monuments is a matter of the federal states. All federal states, with the exception of Bavaria, apply the so-called Schatzregal (treasure trove law) when archaeological finds are discovered.

The Schatzregal is a regulation on the ownership of cultural monuments that are of public interest in preserving them. The term originates from the medieval sovereign rights, the regalia.

(1) Portable cultural monuments, which are ownerless or which have been hidden for such a long time that their owner can no longer be determined, shall become the property of the state upon discovery if they are discovered during state investigations or in excavation protection areas or if they have an outstanding scientific value. Those who fulfil their obligation to hand over their finds may be granted an appropriate monetary reward based on the scientific value of the find.

This means that in most of the cases there is a duty to surrender what has been found. This is to preserve the finds and make them available for scientific research. The handover of finds can be demanded, but if finders hand in finds on their own accord, compensation can be paid.

The always on the go Achim St. arrives from the Rhineland already the very next day. He offers DM 32,000, which the two looters accept and celebrate. However, the illegal excavation and the sale of the Sky Disc will not bring them any joy. All three end up in court and are sentenced, their way there and their behaviour during the proceedings may give a little insight into who they were at the time. Henry W. later cooperates with the archaeologists, and also answers many questions on the Mittelberg about what happened on 4 July.

The disc and the accompanying finds are now in the possession of Achim St., who soaks the objects in rinsing water for several days and then cleans them with steel wool.  Already in 1999, Achim St. tries to resell them. Attempts to cooperate with an experienced fence failing, Achim St. offers the finds directly to museums. He truthfully names Saxony-Anhalt as the place where the finds were discovered, which renders a purchase by museums impossible due to the treasure trove regulations. A few days after the sale, the two looters had shown Achim St. the site of the find on the Mittelberg, where he discovers the missing rivet of one of the two swords in the earth using a metal detector.

After a prolonged quest, the Sky Disc and its accompanying finds were sold to the private collector Reinhold St., for which Achim St. received DM 236,000, thus making a handsome profit. Hildegard B., the owner of the "Historia" restaurant - a well-known meeting place for collectors - brokered the sale.

In 2001 Harald Meller became director of the State Museum in Halle. His inaugural visit to his colleague Wilfried Menghin, director of the Berlin Museum of Prehistory and Early History, is another important point in our story. Menghin shows Meller the photographs of the Sky Disc and the accompanying finds that Achim St. gave him in his sales enquiry. And he names Saxony-Anhalt as the place of discovery. 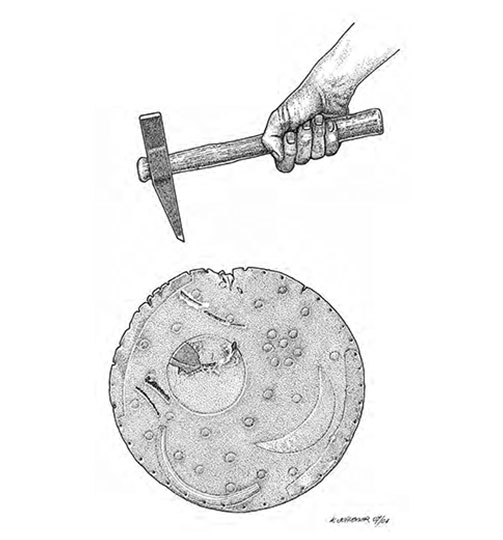 The looters’ pickaxe damaged the upper edge of the Sky Disc, which was standing vertically in the ground. © LDA, illustration: Karol Schauer

The ensuing search by archaeologists and investigating authorities initially came to nothing - until 29 January 2002. On this day, Meller receives a tip from a colleague in Munich that the magazine "Focus" is planning an article on the Sky Disc and asked her for her assessment. She makes contact with the journalist, who tells Hildegard B. about the purchase desire of the State Museum of Prehistory in Halle. Meller then arranged with the investigating authorities: The aim is to secure the Sky Disc in a sham purchase situation, to arrest the sellers, and thus to get the chance to criminalistically reconstruct the trail of the disc since its discovery.

At a meeting in the "Historia" restaurant, Meller expresses the purchase interest of the state of Saxony-Anhalt, at his side the lawyer of the state office and an undercover police investigator. Reinhold St., the owner at the time, and Hildegard B. want DM 700,000 for all the objects - which later will be their undoing. The size of the financial demand shows that they are not just interested in "securing the find for Germany", as they later emphasise repeatedly - but also in making a considerable profit.

The aim of the investigation team is to find out where the finds are kept. That is why Meller insists on examining all the objects personally in order to be able to carry out an "authenticity check" - after all, one has to be sure before making such a purchase. Hildegard B. suggests the Hilton Hotel in Basel, where they meet for a showdown on 23 February 2002. 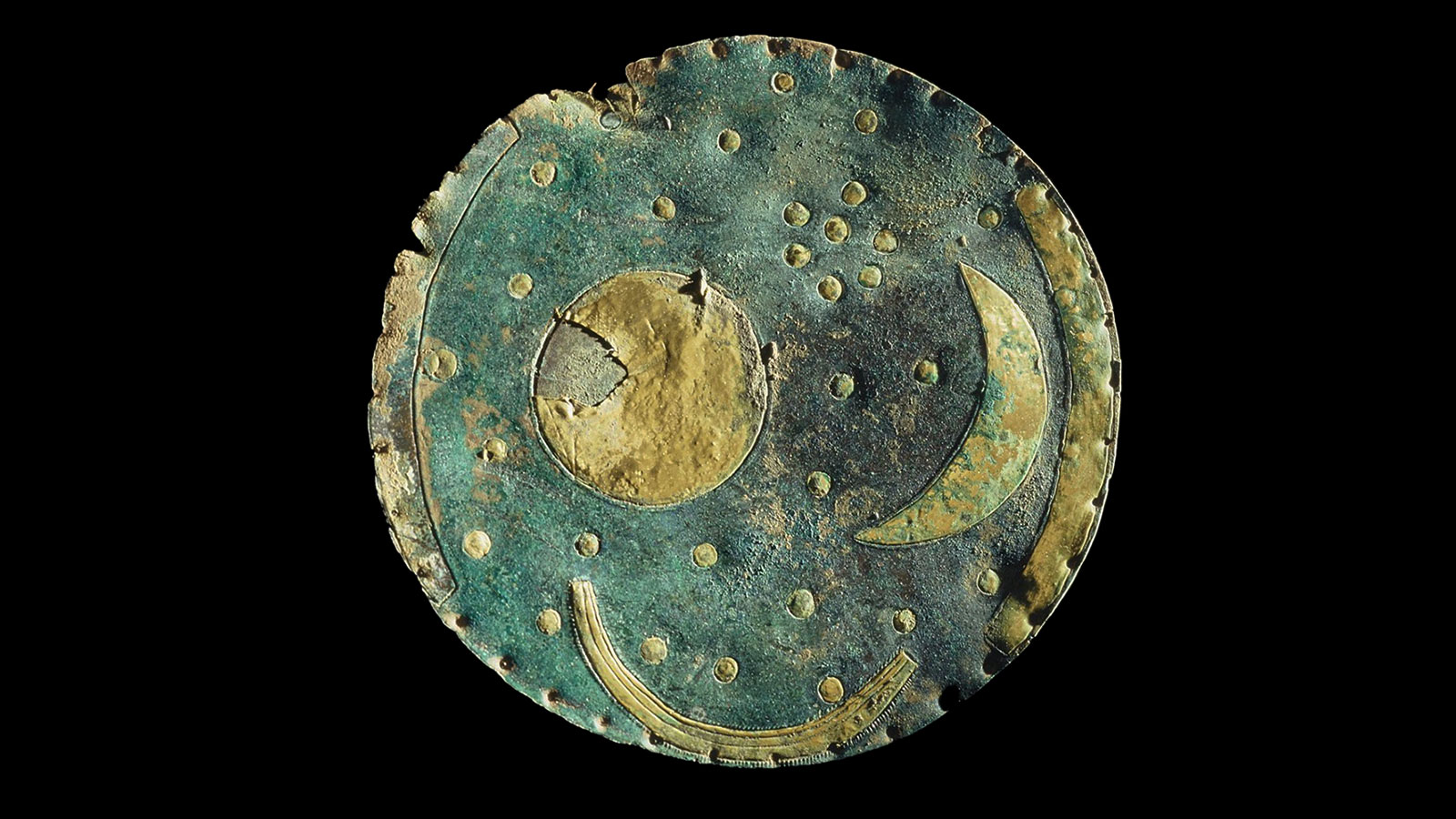 Clearly visible is the damage caused by the illicit excavators' improper salvage as well as the soil adhesions that have not yet been removed. © LDA, photo: Juraj Lipták

In order to appear credible, Meller, with the help of the chemist Christian-Heinrich Wunderlich, who heads the conservation lab of the State Museum in Halle, devised a bluff: the contents of two small vials filled with special liquids should be poured onto the disc in a fixed order and, by means of a resulting generation of smoke, feign an effective, but for the originals completely harmless, test of authenticity - because there is no such thing as an "authenticity test".

Still today, Meller remembers well the challenges of this meeting, which archaeologists otherwise encounter only rarely: deluding strangers into thinking one wants to do business with them - without knowing whether the situation will be exposed and could possibly become dangerous.

They now meet in Switzerland: Meller, Hildegard B., and a silent man whom the state archaeologist gets to know much later as Reinhold St.. In the hotel bar they present him with a sword for authentication. In his excitement, Meller mixes up the chemical substances, there is no smoke, no reaction - unlike with the first "tested" axe.

After a moment's hesitation, Reinhold St. now pulls the Sky Disc out from under his shirt, he has tied it around his body with a towel and fixed the whole thing with adhesive tape.

Now the archaeologist finally holds the piece in his hand which was to shape the following years of his professional life like no other. He is overwhelmed by the pictorial quality of the Sky Disc, but tries not to show it. Here the fake "authenticity test" succeeds: there is spatter and smoke and everyone is satisfied. Nothing seems to stand in the way of the apparent purchase, but Meller secretly wonders if the police have lost sight of him.

Under a pretext, he walks to the toilet of the bar and tries to contact the police with a mobile phone, which he eventually manages after a few attempts. When he returns to the bar, the time has come: the detectives strike and arrest Hildegard B. and Reinhold St. The bronze find from the Mittelberg can at last be delivered to the State of Saxony-Anhalt as the rightful owner.

At a press conference in early March 2002, the Sky Disc was presented to the public. Only a few days later, the sensational find could be admired by interested visitors for the first time in a special exhibition at the State Museum. At the beginning of July 2002, Achim St. contacted the public prosecutor's office in Halle. He not only gave the names of the two looters, but also reported that the real find site was on the Mittelberg near Wangen and shortly afterwards showed Harald Meller the exact findspot on the Mittelberg.

The State Office for Heritage Management and Archaeology Saxony-Anhalt began a systematic archaeological investigation of the site on 20 August 2002. The Sky Disc and its accompanying finds were also scientifically scrutinised by a wide range of disciplines, and one of the most extensive research programmes ever devoted to an archaeological metal find began.

The Mittelberg hill near Nebra with the excavation area in autumn 2002. © LDA, photo: Juraj Lipták

On 8 September 2003, the criminal trial began against Henry W. and Mario R.. The two confessed and cooperative looters were sentenced shortly afterwards to conditional suspended sentences. The two dealers, who wanted to sell the find to director Meller in Switzerland for a profit of DM 700,000, were also in September 2003 given conditional suspended sentences of several months in another court case. Unlike the two finders, these two felt they had been sentenced entirely unjustly and appealed.

The appeal proceedings at the Halle Regional Court dragged on for over a year. The defendants charged with receiving stolen goods and their lawyers brought out the big guns and changed strategy several times. From doubts about the authenticity of the Sky Disc to doubts about Hildegard B.'s sanity, the defence left nothing out. After a whole 33 days of hearings and 76 motions to take evidence, the appeal was rejected on 26 September 2005 and the conviction of the two dealers thus confirmed also in the second instance.

Reaching for the Stars